The Simien Mountains are the highest parts of the Ethiopian Plateau (more than 2,000 meters; or 6,560 feet). They are surrounded by a steep, ragged escarpment, with dramatic vertical cliffs, pinnacles, and rock spires.

Included in the range is the highest point in Ethiopia, Ras Dashen at 4,533 meters (14,926 feet). The plateau and surrounding areas are made up of basalt rock from massive, flood-like eruptions of lava; these flood basalts are probably more than 3,000 meters thick. 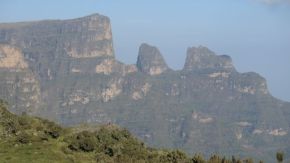 Although the plateau lies in the latitude of the Sahara–Arabia deserts, its high altitude makes for a cool, wet climate. In fact, the Simien Mountains are one of the few places in Africa to regularly receive snow, and they receive plentiful rainfall (more than 1,280 millimeters, or 55 inches).

The moderate climate is shown by light green vegetation on the mountains, compared with the brown canyons, which are hot and dry. The Simien Mountains National Park has been declared a World Heritage Site by the United Nations Educational, Scientific and Cultural Organization for its rugged beauty.

In addition, several extremely rare species are found here, such as the Gelada baboon, which has a thick coat to protect against the cold; the critically endangered Walia ibex, which has long, heavy scimitar-like horns and the Ethiopian wolf, also known as the Simien jackal, which is one of the rarest, and perhaps most endangered canid on Earth.

The name, “Ras Dashen” is a corruption of its Amharic name, “Ras Dejen“, used by the system of the Ethiopian Mapping Authority (EMA), which means “the general who fights in front of the Emperor“.

Ras Dashen is the eastern peak of the rim of an enormous volcano, the northern half of which is cut down about thousand metres by numerous ravines, draining into the Takkazzi River.