With a land area of 1,127,000 square kilometres, Ethiopia is a vast, landlocked country on the eastern side of the African continent. Kenya and Somalia lie to the south, Sudan to the west, whilst to the north and northeast, cutting off Ethiopia’s access to the sea are Eritrea and Djibouti.

Ethiopia includes some of the finest mountain scenery in Africa, notably in the Simien Mountains which have been designated a World Heritage Site. This highland area in the northern part of Ethiopia includes many summits over 4000 metres, the highest peak being Ras Dashen, at 4,533 metres, the tenth highest mountain in Africa. Geographically, the Simien Mountains comprise several major plateaux, which are underlain by basalt lavas thousands of metres thick. It is the erosion of these lavas which has created the dramatic escarpments and freestanding pinnacles which are characteristic of the range and which are comparable in terms of spectacle to the Grand Canyon.

The official language of Ethiopia is Amharic although there are several regional languages throughout the country. You will find that a lot of people in the cities speak some English, certainly enough for engage in some basic conversation.

Ethiopia has a wet season from June to September and a dry season for the rest of the year. Following the wet season, the country is lush and green, with lots of flowers and growing crops. Thereafter, the country dries out progressively until the next rains.  The climate of the Simien Mountains has been likened to the perfect English summer day. At altitudes of around 3000 metres (10,000 feet) and above, we can expect temperatures of around 15°C / 59°F to 20°C / 68°F, falling close to freezing point at night and with frosty mornings a possibility. In the lowlands you will find daytime temperatures of  25°C / 77°F to 35°C / 95°F. 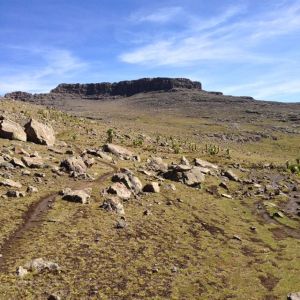